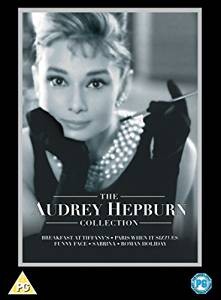 A young New York writer sponsored by a wealthy woman falls in love with the charming, impulsive and eccentric call girl that lives n ext door. Based on a story by Truman Capote.

The classic original starring Audrey Hepburn, William Holden and Humphrey Bogart. The chauffeur for a wealthy family sends his mousey daughter to Paris to broaden her horizons.

An adventure-seeking princess on an official visit to Rome slips away from her chaperones to explore the city with a brash newspaper man, then falls in love with him. The winner of 3 Academy awards.

A fashion editor and a photographer choose a shy bookstore attendant as their ’quality woman.’.

Paris When It Sizzles - Poreilua Pariisissa

A film writer tries out several script ideas with his secretary as heroine and himself as the hero or villain.