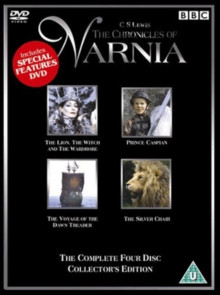 All four adaptations of the C.S. Lewis children’s books using live action and animation to recreate the magical world of Narnia. In ’The Lion, the Witch and the Wardrobe’ (1988) it is a quiet sort of day in the English countryside when Peter, Susan, Edmund and Lucy stumble through the back of an old wardrobe into the enchanted land of Narnia and embark on an extraordinary adventure.When the White Witch learns of their presence, their lives are in danger, but there is talk that Aslan is on the move. ’Prince Caspian’ (1989) sees the four child heroes return to the magical land of Narnia, where evil King Miraz and Queen Punaprisma have usurped the throne. The rightful heir, Caspian, is in hiding.The children join the rebels who want to reinstate Caspian as their prince. In ’Voyage of the Dawn Treader’ (1989) the child heroes, with their unpleasant cousin Edmund, find themselves aboard Prince Caspian’s ship, the ’Dawn Treader’, on a voyage to the edge of the world. Along the way they learn many valuable lessons as they seek the seven Lords of Narnia.Finally, in ’The Silver Chair’ (1990) Jill and Eustace search for Prince Rillian, aided by Puddlegum. They journey to the Giants of Garfang, and thence underground to the land of the earthmen. They must then face the Green Witch, Queen of the Deep Realm, in order to break the spell of the Silver Chair.