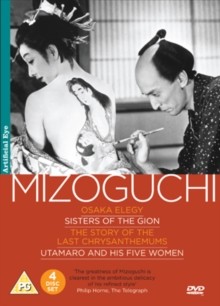 Four films from the celebrated Japanese director. ’Osaka Elegy’ (1936) relates the story of a young woman, Ayako Murai (Isuzu Yamada), who engages in a series of affairs to raise money for her family. Initially, she embarks on a relationship with her boss to obtain the money to stop her father going to prison for embezzlement.

However, when she begins a second relationship with a work colleague to try and earn money for her brother and boyfriend, Ayako is in danger of going too far and getting herself in trouble. ’The Story of the Last Chrysanthemum’ (1939) follows Kikunsoke Onoue (Shôtarô Hanayagi), a young actor who is shocked to discover that people have only been patronising him by saying that he is talented. The only person who seems willing to tell him the truth about his acting to his face is Otoku (Kakuko Mori), a servant his family fire and ban him from seeing due to fear of the scandal a relationship between the pair would cause.

Kikunsoke and Otoku leave together and Kikunsoke vows to win back his family’s affection by becoming a renowned actor. ’Sisters of the Gion’ (1936) focuses on two geisha sisters who have differing attitudes to men. Umekichi (Yôko Umemura) believes so strongly in loyalty that she wants to help her lover, Furusawa (Benkei Shiganoya), when he is abandoned by his wife.

In contrast, her sister, Omocha (Isuzu Yamada), thinks that the pair should be seeking out wealthy patrons rather than supporting others and attempts to manoeuvre Umekichi away from Furusawa. Finally, ’Utamaro and His Five Women’ (1946) offers a semi-autobiographical portrait of the Japanese artist, Kitagawa Utamaro. Utamaro (Minosuke Bandô), renowned for his portraits of women, finds many of his subjects in Tokyo’s brothels.

However, will his philandering ways lead him into trouble?