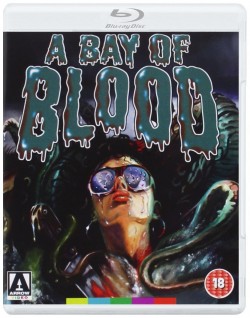 A Bay of Blood (Blu-ray)

They came to play... they stayed to die!

See the film that set the Slasher movie blueprint! Can you handle the terror of Mario Bava s Giallo classic A Bay of Blood?

When a rich countess is murdered, it s a race to see who ll inherit her estate and you can bet that the body count is going to rise rapidly in the process as the plot twists spin wildly out of control.

The pile of bloodied corpses is going to get higher and higher as one by one the mangled victims are hung, speared, stabbed and macheted. Thirteen horrific murders turn the screen crimson with blood. Thirteen corpses float in the Bay of Blood...