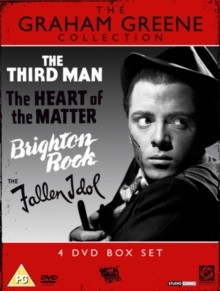 Four films based on the literary works of Graham Greene. In ’The Third Man’ (1949), writer Holly Martins (Joseph Cotten) arrives in war-torn Vienna to take up a job with his friend Harry Lime (Orson Welles). He is informed that Lime died a week previously in a car accident, but upon investigating further discovers that the circumstances of Lime’s death are shrouded in confusion.

Martins begins to wonder just how well he knew his old friend after the head of local military police, Major Calloway (Trevor Howard), convinces him that Lime was in fact a black market drug racketeer responsible for many deaths. In ’Brighton Rock’ (1947), 16-year-old gangster Pinkie Brown (Richard Attenborough) uses young waitress Rose Brown (Carol Marsh) as an alibi after commiting a murder at the race track. Worried that she will give him away, Pinkie marries Rose.

However, his subsequent attempts to drive her to the point of suicide do not go according to plan. ’The Heart of the Matter’ (1953) stars Trevor Howard as Scobie, an assistant police commissioner posted in Sierra Leone in World War 2. Exploring familiar Greene themes such as religion and work politics, the film co-stars Elizabeth Allan and Maria Schell as the wronged wife and the hard-done-by mistress.

’The Fallen Idol’ (1948) is an award-winning adaptation of Greene’s short story ’The Basement Room’, and is told primarily from a child’s perspective. Philippe (Bobby Henrey) is the young son of a diplomat who idolises Baines (Ralph Richardson), his father’s butler. When Baines’ wife is found murdered and Baines is implicated, Philippe does everything he can to point the investigation away from the butler.

In doing so he makes matters worse - and also discovers that his hero is not the man he thought he was.