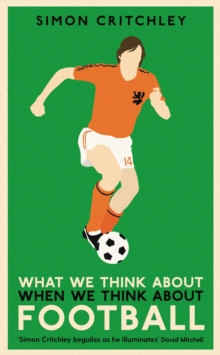 What we think when we think about football

What do we think about when we think about football? Football is about so many things: memory, history, place, social class, gender (especially masculinity, but increasingly femininity too), family identity, tribal identity, national identity, the nature of groups. It is essentially collaborative, even socialist, yet it exists in a sump of greed, corruption, capitalism and autocracy. Philosopher Simon Critchley attempts to make sense of it all, and to establish a system of aesthetics - even poetics - to show what is beautiful in the beautiful game.

He explores, too, how the experience of watching football opens a particular dimension in time; how its magic wards off oblivion; how its dramas play out national identity and non-identity; how we spectators, watching football with tragic pensiveness, participate in the play. And of course, as a football fan, he writes about his heroes and villains: about Zidane and Cruyff, Clough and Revie, Shankly and Klopp.

Tragedy, the Greeks and Us