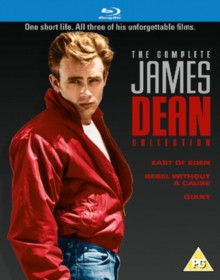 Collection of three classic James Dean films. In ’East of Eden’ (1955) two brothers compete for the love of their stern, overbearing, widowed father. However, when Cal (Dean), the rejected ’rebel’ son, discovers that his mother is not dead but running a nearby brothel he tells his brother Aron (Richard Davalos).

This leads to the destruction of not only his relationship with Aron but also his father. ’Giant’ (1956) is an epic saga which begins when Texas cattle baron Bick Benedict (Rock Hudson) takes a non-Texan wife, Leslie (Elizabeth Taylor). The story then traces two generations of his family, alongside the life of disreputable ranch-hand Jett Rink (Dean), who strikes it rich on an oil well and falls in love with Leslie.

Director George Stevens won an Oscar for his work and the film garnered nine more nominations, including one for Dean, who was killed soon after filming. Finally, ’Rebel Without a Cause’ (1955) takes place over a 24-hour period and follows Jim Stark (Dean), a restless teenager who is always in trouble with the law. When Jim is picked up for being drunk and disorderly he notices Judy (Natalie Wood) at the police station and determines to ask her on a date at high school the next day, which leads him into conflict with her boyfriend Buzz (Corey Allen).