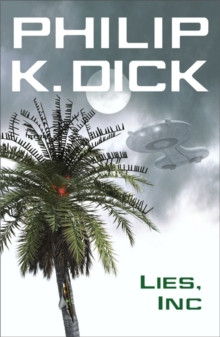 A masterwork by Philip K. Dick, this is the final, expanded version of the novellla THE UNTELEPORTED MAN, which Dick worked on shortly before his death.

In LIES, INC., fans of the science fiction legend will immediately recognise his hallmark themes of life in a security state, conspiracy, and the blurring of reality and illusion.

In this wry, paranoid vision of the future, overpopulation has turned cities into crammed industrial anthills.

For those sick of this dystopian reality, one corporation, Trails of Hoffman, Inc., promises an alternative: Take a teleport to Whale’s Mouth, a colonized planet billed as the supreme paradise.

The only catch is that you can never come back. When a neurotic man named Rachmael ben Applebaum discovers that the promotional films of happy crowds cheering their newfound existence on Whale’s Mouth are faked, he decides to pilot a spaceship on the 18-year journey there to see if anyone wants to return.

Do Androids Dream of Electric Sheep

Do Androids Dream Of Electric Sheep

Do Androids Dream Of Electric Sheep

The Man In The High Castle

Flow My Tears, The Policeman Said

Mary and the Giant