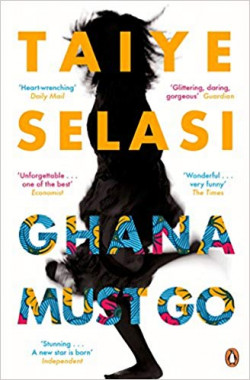 A stunning novel, spanning generations and continents, Ghana Must Go by rising star Taiye Selasi is a tale of family drama and forgiveness, for fans of Zadie Smith and Chimamanda Ngozi Adichie.

Meet the Sais, a Nigerian-Ghanaian family living in the United States. A family prospering until the day father and surgeon Kweku Sai is victim of a grave injustice. Ashamed, he abandons his beautiful wife Fola and their little boys and girls, causing the family to fracture and spiral out into the world - New York, London, West Africa, New England - on uncertain, troubled journeys until, many years later, tragedy unites them. Now this broken family has a chance to heal - but can the Sais take it?

’Ghana Must Go is both a fast moving story of one family’s fortunes and an ecstatic exploration of the inner lives of its members. With her perfectly-pitched prose and flawless technique, Selasi does more than merely renew our sense of the African novel: she renews our sense of the novel, period. An astonishing debut’ Teju Cole, author of Open City

Taiye Selasi was born in London and raised in Massachusetts. She holds a B.A. in American Studies from Yale and an M.Phil. in International Relations from Oxford. In 2013 she was selected as one of Granta’s 20 Best Young British Novelists.

ations from Oxford. In 2013 she was selected as one of Granta’s 20 Best Young British Novelists.