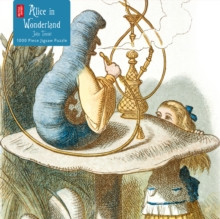 Part of an exciting series of sturdy, square-box 1000-piece jigsaw puzzles from Flame Tree, featuring powerful and popular works of art. This new jigsaw will satisfy your need for a challenge, featuring Tenniel: Alice in Wonderland. This 1000 piece jigsaw is intended for adults and children over 13 years.

In the years since publication, it has been illustrated by some of the finest artists of their times, the first being Sir John Tenniel. Though his primary occupation was as a political cartoonist and illustrator for Punch magazine, Tenniel is now remembered mainly for his illustrations of Alice’s Adventures in Wonderland and Through the Looking-Glass. The core of his technique was to imitate woodcut effect using ink and paper, an effect visible in the illustrations of Carroll’s children’s classics.

Tenniel’s charming illustrations have, of course, come to symbolize Alice for many. This original illustration of the Blue Caterpillar shows his all-too-human arms. Known for his hookah-smoking, the Blue Caterpillar first appeared in chapter four of the original Alice’s Adventures in Wonderland and has since become one of the most popular characters in the book, despite Alice’s dislike of his rudeness and difficult philosophical questions.