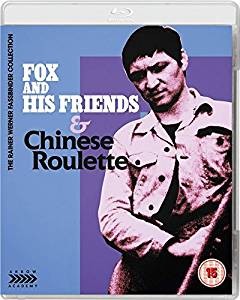 Fox and His Friends/Chinese Roulette

Few filmmakers have enjoyed a decade quite so diverse or quite so prolific as Rainer Werner Fassbinder did during the seventies. Amid the likes of The Bitter Tears of Petra von Kant and Fear Eats the Soul, it s easy to forget some of the lesser-known and more singular works, two of which are presented here.

Fox and His Friends is among the director s most personal works and the first to tackle homosexuality in a direct manner. Fassbinder himself plays Fox, a sweet working class soul whose relationship with wealthy industrialist Eugen, he discovers, is based almost wholly on his unexpected lottery win. When his money runs out, so does any affection, with tragic consequences.

Chinese Roulette, set in an isolated house during a weekend break, is like Agatha Christie s And Then There Were None without the murders a tense psychodrama in which infidelities are revealed and families breakdown. At its centre is nouvelle vague icon Anna Karina, a rare outsider alongside the familiar Fassbinder faces.