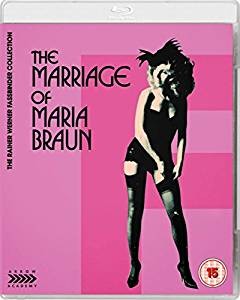 Rainer Werner Fassbinder s penultimate film of the seventies was also his most successful. Popular with audiences and critics alike, among them Roger Ebert and François Truffaut, The Marriage of Maria Braun finally provided its director with the international breakthrough he had craved for so long.

Maria Braun marries a young soldier amid the Allied bombing raids of World World II the day before he must return to the Russian front. Awaiting his return in 1945, she is informed of his death and must endure and navigate the post-war years alone. Mirroring the German Wirtschaftswunder ( economic miracle ), she determinedly rises to prosperity as a self-made woman.

Centred on an astonishing performance from Fassbinder regular Hanna Schygulla in the lead role, The Marriage of Maria Braun took over four million Deutschmarks in its home country and made over a million dollars in the US. Such success proved influential too without it we would likely never have seen Helma Sanders-Brahms s Germany, Pale Mother or Edgar Reitz s epic Heimat.

Fox and His Friends/Chinese Roulett